Ware Shoals on the Saluda River was originally the site of a small grist mill operation. In 1902 an industrialist, Nat Dial, sought to dam the river for electric power but lacked the necessary funding for the venture. He founded the Ware Shoals Manufacturing Company in 1902 but later would encounter financial instability. The newly found company had its sights set on completion of a power plant at Ware Shoals and the construction of a large cotton mill and village on the Southern side of the Saluda. Work began on the mill, village, and the 5 mile railroad branch by Southern Railway in 1902. In 1903, the project attracted the interests of the W. B. Smith Whaley & Company. The company was sold to Benjamin Reigel in 1905.

Ware Shoals dam is constructed of solid masonry above the shoals and a canal and powerhouse are located on the Laurens County side of the river. A 1 1/2 mile canal was created of earth construction to the location of the powerhouse. Both sides of the canal had earth embankments created with extra height in case of flood waters. Four penstocks and gates led to the stone powerhouse. The original powerhouse is constructed of stone in similar architecture as the later Boyd's Mill Pond by the Reedy River Power Company in 1909. Two sets of turbines and generators were installed, half of the capacity of the total capacity. Two 27 inch turbines built by the Holyoke Machine Company are in direct connection to two 750 KW General Electric made 2,300 volt, 3-phase 40 cycle, generators with exciters. An additional two sets of turbines and generators would be installed at a later date, creating the output of 3,000 to 4,000 HP. Power was stepped-up and transmitted on a 2.3 kV transmission line from the powerhouse to the 25,00 loom mill (to eventually be 50,000) where transformers lower voltage for electric drives, lighting, and use in the village. The power plants completion and first operation, along with the opening of the cotton mill, was in May, 1906.(Information found here on the plant as originally completed in 1906 can be found in the book "Modern Cotton Mill Engineering" by the W. B. Smith Whaley & Company in 1903 digitalized by the University of South Carolina.)

In 1939, an extensive modification was done to the powerhouse and two of the the four original units. A new generator built by Kaplan was installed, replacing two of the original four sets. An addition was built onto the power as a tall brick structure housing the generator that required more space. Again in 1984, another modification was done to the powerhouse. The remaining two sets of the turbines and generators were replaced with modern single turbine driving the Kaplan generator. A surge tank was also constructed at the rear of the building and new penstocks were built. (This information was gathered from ENEL North America.)

Later the Ware Shoals Manufacturing Company was sold to the Reigel Textile Corporation in 1946. Ware Shoals from the beginning was a boom-town until the 1980s when poor management threatened shutdown. In 1985, the company and mill went under and was sold to Mount Vernon Mills. Ware Shoals power plant was privately owned by Reigel until 1987, when it was sold to ENEL North America. ENEL America modernized the plant to sell electricity to the Duke Power Company, today known as Duke Energy. 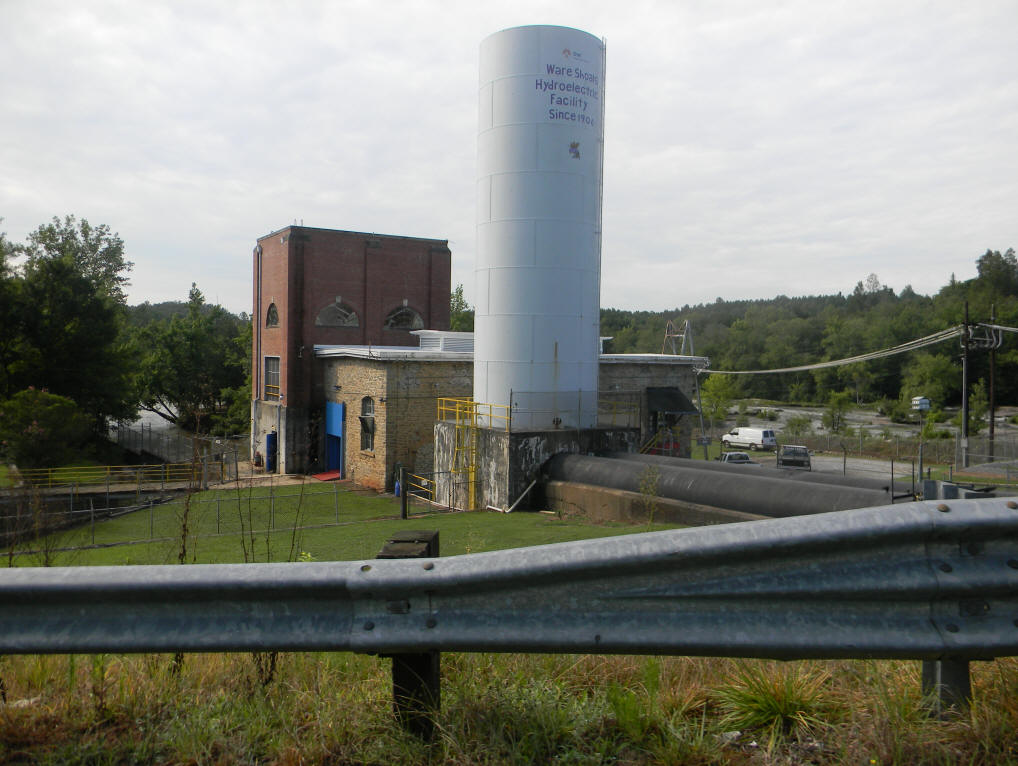 The original 1906 masonry powerhouse now houses a single turbine for the Kaplan generator located in the brick addition completed in 1939. The surge tank is not original and the penstocks have been replaced for the new turbine and generator. This powerhouse's architecture is very similar, if not recycled, as the Boyd's Mill Pond powerhouse, completed in 1909. On the rear of the powerhouse, four sealed stone arched-entries can be seen where the original penstocks entered the building. ENEL America, the current owner and operator, has their logo painted near the top of the surge tank.